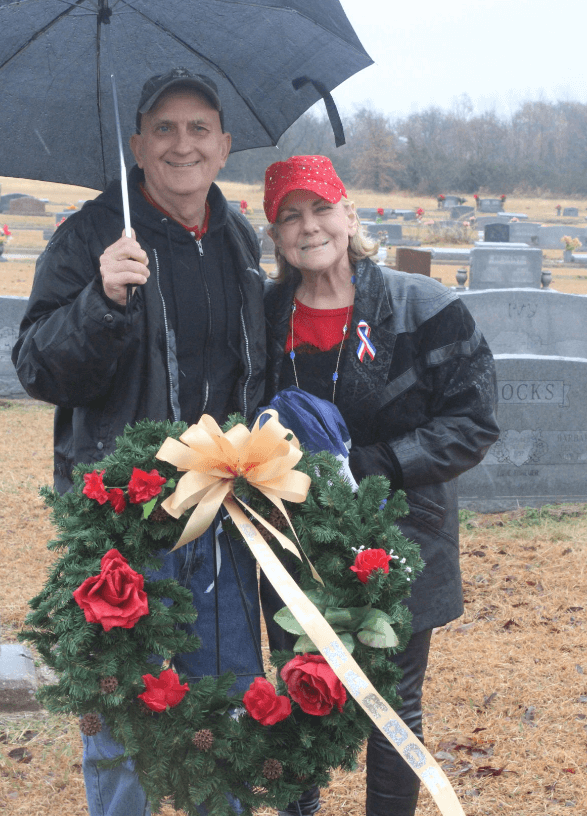 He and the others visited the graves of former Cleburne residents and Pearl Harbor survivors Joe Marchbanks, Cecil Jones and Wayne Polk.

Two of Jones’ children, Randy Jones and Carol Johnson were also on hand to do the honors of laying a wreath at their father’s grave.

Shultz led a prayer at each man’s grave thanking God for their service and for their families sacrifices.

Jones, a master sergeant in the U.S. Army Air Corps, was stationed at Hickam Field on Dec. 7, 1941. He received a Bronze Star for his actions that day, one of four he received during his military career. Jones received other medals including the American Defense Service Medal, the Asiatic-Pacific Campaign Medal and the European-African-Middle Eastern Campaign Medal.

Johnson, the middle daughter of Jones’ six children said she was almost 11 when her father passed.

“Yes, I remember him,” Johnson said. “He would just tell you how it is. Honesty was one of his biggest traits. But I remember him taking us fishing, always teasing us and remember him as just a great dad to be around. We were blessed.

“I don’t know if you remember the old barber Jack Thomas but he used to tell me, ‘Your dad would march you all in to get your haircuts like little soldiers.’ Jack said dad was probably the most patriotic man he ever met, and Jack had been in the service too.”

Johnson visited the USS Arizona during a trip to Hawaii with her husband.

“We saw an older man there and didn’t think anyone would know my dad from way back then but asked him all the same,” Johnson said. “I asked if he had ever heard the name Cecil Jones and he said no. But dad did not like his first name and named himself Joe. So anyway, the guy said, ‘I knew a Joe Jones who was actually in the mess hall that day and was shot at that day.’

“I mean my heart fell to my feet. We always knew dad was there and would do whatever his country asked him to. But that was just kind of wonderful that someone remembered him.”

Randy Jones said he’s touched that the American Legion and others still remember his father and others who were there during Pearl Harbor and World War II.

“It’s nice and a great honor that they’re still remembered. They deserve is and it’s important that they always are remembered,” Jones said.

Jones was only 5 when his father passed.

“I have the flag that draped his coffin and a picture of dad,” Jones said. “Even though my son and daughter never knew him it was always important to me that they knew about him.”

Bill Jones, who was 11 when his father passed away, was unable to make Friday’s ceremony but said he and his family are honored by the Legion’s efforts.

“I’m sure dad would have appreciated this,” Bill Jones said via telephone on Thursday. “Especially coming from the American Legion because there’s a kinship among veterans like no other. People always have bonds with their friends but I imagine there’s nothing like the brotherhood of the military and risking your life for and depending on one another.”

Bill Jones remembers his father as the strict commander in chief at home but said he also got to know the other side of his father while helping out at Sarge’s BBQ, a restaurant Cecil Jones ran on the east side of Cleburne.

“I got to talk to him and him and some of his buddies would be telling stories about the war years,” Bill Jones said. “That was neat to get to see that side of him but what impressed me even more was seeing the way he treated other people and the way they treated him. That made a big impression even though I was just a kid at the time. I remember too he taught us right from wrong and to stand up for yourself if you’re right and to apologize if you’re wrong.”

Johnson said she too helped out at her father’s restaurant.

“I was a squirt back then but I would give the customers their change from the counter,” Johnson said. “People would come in, pat me on the head and say, ‘She’s so cute. How can she do that? She’s so little.’

“But I was actually like in fifth grade. I just didn’t look it.”

She and her siblings ranged from 2 to 13 years old when her father died, Johnson said.

“Besides Randy, Bill and me there’s Luelda Robichaux, the oldest, and Johnny and Danita Barry, the youngest,” Johnson said. “I remember he was patriotic and loved his country and passed that on to all of us. He taught the boys how to put up the flag and take it down and all of that.”

Bill Jones joked that he researched his father’s military records — which took several years, some of the records having been destroyed in a fire — in part because people were often expressed skepticism.

“They’d say, ‘Nobody went to that many places during the war. That’s impossible,’” Bill Jones said. “I knew dad didn’t lie and that’s what set me to researching. I knew he did all that. I just didn’t know how until I did all the research.”

Like his brother Randy, Bill Jones said it’s always been important that his children and grandchildren knew of him and his generation.

“I wanted my kids to know not just the importance of sacrifice but the value of it too,” Bill Jones said. “To know their roots so they have a firm foundation to build on.”

Visit www.prepaidfunerals.texas.gov for information relating to the purchase of pre-need funeral contracts including descriptions of the trust and insurance funding options available under state law.